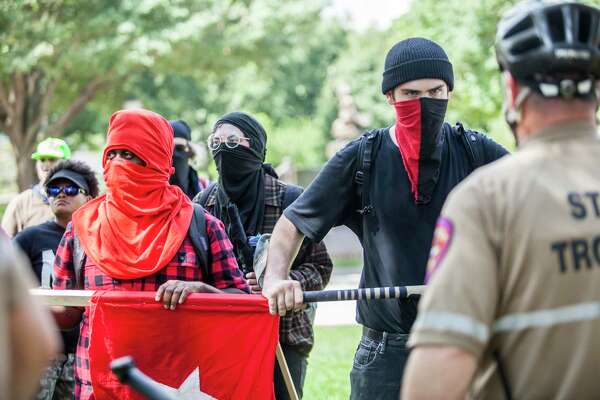 This is everything you need to know about the Antifa group. Donald Trump promised on Twitter this week that “the United States of America will be designating ANTIFA as a Terrorist Organization”.

Legal experts immediately threw cold water on the proposal, arguing that there may be no means by which any domestic entity can be designated in this way.

But, perhaps more importantly, experts also say that there is no actual antifa organization for Trump to define in this way. Put simply: antifa does not really exist as a distinct entity.

Antifa is a useful umbrella term that denotes a broad spectrum of groups and individuals of far-left or anarchist tendencies. The term itself means simply anti-fascist.

Mark Bray, a historian and the author of Antifa: The Antifascist Handbook, said in a telephone conversation that antifa is a loose movement of “decentralized revolutionary self defense” opposed to the far right.

Antifa conspiracy theories are common amongst rightwing politicians, media and activists. Bray said: “The right describes antifa as a unitary organization with leaders and even secret funding” though that is simply not true.
An antisemitic conspiracy theory that the billionaire financier George Soros funds antifa also has widespread currency on the right, including among influential Trump-world figures.
Although the president and his allies wish to conflate large protests in every city with radical anti-fascist groups, Bray says they “drastically overstate the numbers and influence” of committed Antifa activists.

The antifa movement traces its heritage to radical left groups that resisted dictators such as Mussolini and Hitler in Europe in the 1930s. In Germany, the communist-aligned Antifaschistische Aktion fought street battles with Hitler’s followers until it was forcibly disbanded in 1933.
This tradition was revived in Europe during the 1980s and 1990s, with the rise of nazi skinheads and other far right groups. It arrived in the US in the late 1980s, with the creation of Anti Racist Action (ARA) in Minneapolis.

The movement – which is also strongly associated with anarchist politics – is not defined by lasting institutions. ARA no longer exists and the oldest identifiable group in the US is probably Portland’s Rose City Antifa, which dates from 2007.
Contemporary antifa groups have a distinctive repertoire of tactics ranging from publicly identifying members of far-right groups, to physically resisting them in the streets. Often, in street protests, activists dress in “black bloc” attire including balaclavas or masks to conceal their identity.

Sometimes, antifa street demonstrations involve violence: between activists and police, or members of far-right groups, or both.
The most controversial recent episodes have involved violent confrontations with rightwing social media personalities and sometimes, with journalists and photographers who activists believe will compromise their anonymity.

Bray says that antifa’s actions in this respect “are nothing like the violence police have visited on journalists” in recent days as dozens of reporters have been beaten, teargassed, shot and arrested by police covering the Black Lives Matter protests.… just when we need it the most. Millions of readers around the world are flocking to the Guardian in search of honest, authoritative, fact-based reporting that can help them understand the biggest challenge we have faced in our lifetime. But at this crucial moment, news organisations are facing a cruel financial double blow: with fewer people able to leave their homes, and fewer news vendors in operation, we’re seeing a reduction in newspaper sales across the UK. Advertising revenue continues to fall steeply meanwhile as businesses feel the pinch. We need you to help fill the gap.

We believe every one of us deserves equal access to quality news and measured explanation. So, unlike many others, we made a different choice: to keep Guardian journalism open for all, regardless of where they live or what they can afford to pay. This would not be possible without financial contributions from our readers, who now support our work from 180 countries around the world.

We have upheld our editorial independence in the face of the disintegration of traditional media – with social platforms giving rise to misinformation, the seemingly unstoppable rise of big tech and independent voices being squashed by commercial ownership. The Guardian’s independence means we can set our own agenda and voice our own opinions. Our journalism is free from commercial and political bias – never influenced by billionaire owners or shareholders. This makes us different. It means we can challenge the powerful without fear and give a voice to those less heard.

Reader financial support has meant we can keep investigating, disentangling and interrogating. It has protected our independence, which has never been so critical. We are so grateful.

We need your support so we can keep delivering quality journalism that’s open and independent. And that is here for the long term. Every reader contribution, however big or small, is so valuable.